12th Presidential Forum: Technology in Research and Operations—How We Got Here and Where We’re Going 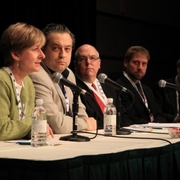 One of the first responsibilities faced by an incoming President of the AMS is to propose a unifying theme for the Annual Meeting, which will conclude his or her year of leadership of the Society. For Jon Malay, this process took about 10 seconds of thought. Technology has always been at the forefront of his career since one of his first meteorology professors in the early 1970s taught from a textbook with the title “Computers and Satellites: The Coming Revolution in Meteorology.” His career has continually been touched along the way by that revolution. As a representative of one of the nation’s highest high-tech companies, he knows the dynamic challenges of research and operations in meteorological, hydrologic, oceanographic, heliophysical, and other related physical sciences can only be met by the development and employment of evermore sophisticated technologies. Satellite systems far overhead, seismic sensors in the ocean’s abyss, and in situ and remote sensing systems in between are providing essential data for geophysical models running on hyperfast supercomputers. Complementing these tools are advanced technologies for 4D data and simulation visualizations, data and information management and communications technology, and system of systems architectures. Because technology is vital to our research and operations, and by extension the society the AMS serves, it was a natural choice for the 2012 Annual Meeting Presidential Forum.

The Forum’s opening plenary on Monday morning will feature keynote addresses by two individuals from our own community who know the significance of this Annual Meeting’s theme: Technology—How We Got Here and Where We Are Going.

Dr. Warren Washington, senior scientist at the National Center for Atmospheric Research (NCAR), has, in the course of his long and distinguished career, seen firsthand the impacts and challenges presented by new technology in atmospheric research. Dr. Washington is an Honorary Member and Past-President of the AMS, as well as a recipient of the nation’s highest honor for scientific contribution, the National Medal of Science. And so, it is an honor to have his remarks open the Annual Meeting.

It is an equally high honor to have, as the second keynote speaker, Dr. Kathryn Sullivan, the Assistant Secretary of Commerce for Environmental Observations and deputy administrator for the National Oceanic and Atmospheric Administration (NOAA). Dr. Sullivan previously served as NOAA’s chief scientist, and is a distinguished scientist, renowned astronaut (the first American woman to walk in space), and an intrepid explorer. In her position at NOAA, and with her close relationship with the National Aeronautics and Space Administration (NASA), she has keen insights into “where we are going.”

And, finally, members of the Presidential Forum audience will have an opportunity to offer their own visions of where we are going, with a focus on a more distant future. AMS President Malay will be joined on stage by Mr. George Komar, director of NASA’s Earth Science Technology Office in the agency’s Science Mission Directorate. Together, they will briefly provide some thoughts about the AMS community’s technological capabilities and the changes we will see in society 20 years and more into the future. They will then engage with the audience in an interactive dialog that should be an exciting and stimulating participatory exercise of envisioning our future.